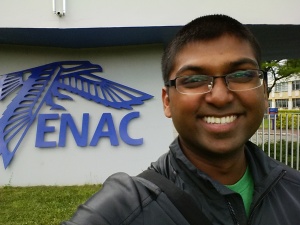 It’s been one hell of a week. I arrived here last Thursday night, and it’s been quite a ride since. Toulouse is a beautiful city, with great people, and the program has kicked off with a great start. Not going to lie that it hasn’t been a struggle adjusting, but it’s been an experience. So far, when we haven’t been exploring the city, we’ve taken courses on aircraft economics and safety with our first exam tomorrow, can’t wait for that. With the time that we did have in the city, we explored on our own and also had the opportunity to explore the city with a guide. 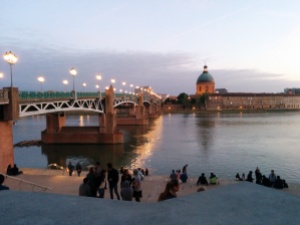 On Monday we had the opportunity to visit downtown Toulouse and explore some of the cultural buildings that encompass the city through a guided tour. Toulouse is home to over 450,000 people and is the fourth largest city in France in addition to being the center of the European Aerospace Industry. The buildings in the city are mostly made of brick and dirt from the Garonne River, dubbing Toulouse with the nickname of “la ville rouge”. Some of the buildings are made of stone, however, this is uncommon since the stones come from the Pyrenee mountains and are difficult to. Being in the heart of Midi Pyrenee, we learned about the architecture and the occitan culture that has influenced the city.

First up on the trip was the heart of city, Capitole! We were lucky to get in since it is usually being used to house an event. The building was originally constructed in 1190. While the building, as it stands today, wasn’t built in any single time period, the interior dates back to the 16th century while the facade was built more recently in 1750. The building was once used as the as the seat of the government as Toulouse became known for it’s wealth and influence. Today the building houses the city hall, Théâtre du Capitole de Toulouse – an opera company, and a symphony orchestra. It is known that you must be very talented to perform here. One unique fact about the plaza outside the city hall was that local officials wanted to keep the appearance of Capitole as untouched as possible, so they declared that any business around Capitole needed to color their signs gold, to keep with the history of the gold and silver mines surrounding the city. Even McDonalds wasn’t an exception. 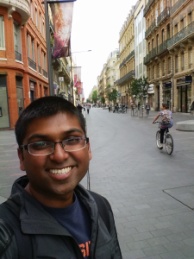 During this tour, we saw many boutiques and art around town. The history of the town was displayed through this art. We saw a few monuments and fountains were the people of Toulouse gathered engaging in conversation. There were some paintings on the ceiling in front of some boutiques that told stories of Toulouse such as the love for rugby and how Toulouse plays a large part in the Aerospace society.

Later in the day we visited La Basilique Saint-Sernin, a beautiful church built between 130 and 1385 at the site of a previous basilica which contained the body of Saint Sernin, the first bishop of Toulouse, in c. 250. While most of the basilicas were made of stone, this one was made mostly of painted brick to mimic stone. Inside of the church we learned a little bit about the architecture printed on euro bills.

Another place we visited was the Couvent des Jacobins. One of the many unique characteristics of the building is something the locals affectionately call, the “Palm Tree”, a 22-meter high column with groin vaults banding up in a shape similar to palm tree fronds. The monastery also features dark blue and red stained glass windows that allow light inside the building to change from cold light to warm light as the day goes on. 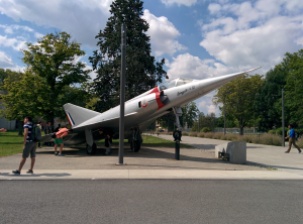